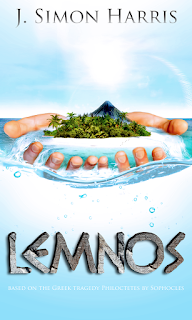 Back to synopsis.
Available exclusively on Amazon Kindle.

The following excerpt from my novel, Lemnos, is a story told late in the book by the character Philip Titus. There are a few references to earlier parts of the story, but for the most part this selection stands well on its own, which is why I've chosen it for the website. The excerpt is also a good example of an important theme of the novel: the modernization of ancient Greek history and mythology. It tells the story of the final days of Dr. Eric Lee, a friend and colleague of Philip Titus. The characters Philip Titus and Eric Lee are patterned after Philoctetes and Heracles (or Hercules) from Greek mythology; and the story in the excerpt is patterned after the mythological death of Heracles, who killed the centaur Nessus and, through a deceitful ploy, was poisoned by Nessus in turn. In my modern version, Eric Lee is a scientist, and the twelve trials of Hercules are scientific challenges. The centaur Nessus is a human and a biochemist, and the poison that kills Eric Lee is his own invention. If you enjoy the excerpt, please consider purchasing the rest of the novel, which is available on Amazon Kindle for $2.99.

Thanks for reading! Please go to the Amazon Kindle store page to support my work.

J. Simon Harris
Born and raised in Greensboro, North Carolina, now I live in Raleigh with my wife Ashley, our son Luke, and our dogs Hallie and Lucy. I have written a novel (Lemnos, available now on Kindle), many short stories, and innumerable poems. I have also translated poetry from Spanish, Italian, Ancient Greek, Old English, and Provençal. My new translation of Pablo Neruda's Twenty Love Poems and a Song of Despair is available now in print and eBook formats. My translation of Dante's Inferno in terza rima will be published in 2021.